A downloadable Blu-Play game for Windows, macOS, and Linux

The story so far

An underground organisation known as "The Superhero Network" (TSN) revealed to the world, that all the big wars on earth for the past century were in fact secretly started by the acknowledged peacekeepers on the planet, rather than the minority groups who were always blamed instead, on the major news outlets.

The revelation wasn't exactly a shocker though. Most people had known for decades really, but just chose to ignore it because they couldn't *really* believe it. And even if it was true - what were they to do about it anyway?

With The Big Exposure, TSN had presented the whole world with indisputable evidence. There was no longer any doubt. Everyone knew the truth now, and TSN quickly gained worldwide acknowledgement and popularity. The so-called peacekeepers got the nickname "The Invaders", because of their invasive actions on the world: Spying on the public with satellites and space-drones, and using them to invade innocent foreign countries to gain even more power and control.

TSN has been in open war against The Invaders ever since the exposure. The Invaders are few in numbers, but they're all rich and powerful: They have all the latest tech and all the latest weapons. The Superhero Network in turn outnumbers The Invaders by at least a million people, but they still lack funding, and is therefor forced to use old outdated tech that doesn't get enough service checks.

Having a rather strong passion for justice, you recently signed up to The Superhero Network offering your skills as a Defence Vessel pilot. A Defence Vessel is a one-man space-pod, created by members of TSN in the early days of the war. It is designed to be used for destroying spy satellites and space-drones owned by The Invaders.

So there you are, in space, behind the control panel of your assigned Defence Vessel, ready to shoot down some spy satellites and drones - but then you discover that the gun controls are broke: Your gun is stuck in a one-way rotation! Oh no!
Something also appears to be wrong with the navigational system. Some directional buttons seems to only work one at a time! In fact, the only thing that seems to be working alright on this thing is the shield! But even in working condition the shield has its limits too.

You're a rather skilled Defence Vessel pilot, but this isn't quite what you signed up for. Unfortunately it's too late to back out now. You have no choice but to do the best you can and hope to survive this thing...

Play in your browser, or download ISO for PS3 / PS4 from blu-play.com 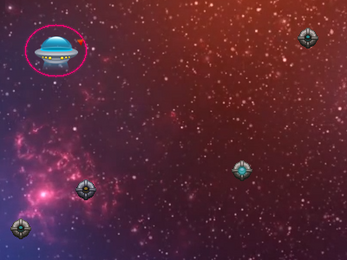